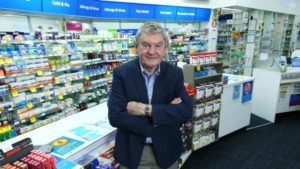 They are the small-business ­people Bill Shorten believes should not receive a tax cut.

In the marginal seat of Lindsay, 50km west of Sydney’s CBD, pharmacist Tony Ferguson ­employs two dozen people and turns over $4.5 million across two shopfronts on Penrith’s High Street. The Coalition’s proposed tax cut for businesses with turnover of less than $10m would allow him to hire at least one more senior pharmacist and “I would be able to increase the staff at both of my stores”.

On the other hand, Mr Ferguson said, preserving bulk billing under Medicare, was “vital” to young families — an issue that would “swing the vote” in Lindsay.

Carleita Stewart, however, cannot understand how, for the Labor leader, the case for a small-business tax cut “doesn’t stack up”. Or the point of significantly expanded education spending. “We’ve thrown money at education for how many years, and we’re going backwards,” she said.

She and husband Wayne run Wayne Stewart Quality Cars, having operated vehicle dealerships in Penrith for a quarter of a century. They turn over about $2m annually. “If businesses had more money, they wouldn’t put it in their pocket; they’d want to ­expand their business, put more people on,” she said. “If they can use their own money to expand, it benefits everyone and in the long run the government gets more tax receipts as the business grows.”

Amid the rhetoric of class war — working people versus the “top end of town” — it’s easy to overlook the nub of the argument; tax breaks for the little end of town. The central economic choice of the 2016 federal election is between the Coalition’s offer to jump-start the economy through small business tax cuts or Labor’s promise to expand funding for health and education.

Or between Coalition aspiration and Labor envy, as many senior business people have claimed in recent days. They went public last week, led by the unlikely figure of former Queensland ALP treasurer Keith De Lacy, who described the tone of Bill Shorten’s attack on the Coalition’s tax cuts as “the most anti-business policy I’ve ever seen federal Labor put to an election”.

Another Queensland Labor stalwart, former federal treasurer Wayne Swan weighed in from the other side yesterday on Twitter: “There’s a class war in Australia: a Lib$50Bn gift to corporations @ the expense of jobs, wages, health & edu for working people.’’

Mr Shorten has characterised the prospect of large companies getting tax cuts sometime beyond 2019 as “a $50bn giveaway” to the nation’s biggest corporations.

He did it again yesterday: “The numbers don’t stack up in terms of the corporate tax giveaway that Mr Turnbull’s providing. Mr Turnbull’s trying to pretend that a $50bn tax giveaway to the top end of town will miraculously create economic growth; it’s a shallow policy from a government with no real economic plan for the future.”

The Opposition Leader made it clear again yesterday any business tax cuts in the next term under Labor would go only to businesses turning over less than $2m.

But the roughly 100,000 small enterprises with a turnover of between $2m and $10m are the heartland of sustainable family run businesses.

Beneath them is a sea of almost 2 million micro-­enterprises with 10 or fewer employees that is forever churning, new businesses forming or folding. The Australian Bureau of Statistics estimates a casualty rate of 40 per cent over a four-year period among microbusinesses.

Once a business reaches annual sales of $2m, its chance of surviving at least for the next four years rises to more than 80 per cent.

Tax office figures show those businesses account for 22 per cent of sales in the hospitality industry, 20 per cent of real estate turnover, 17 per cent of construction and 11 per cent of retail sales. Once a business’s sales reach $2m, it is providing stable employment. The average business with sales of $2m-$10m has 22 employees, with the sector as a whole accounting for 2.2 million employees.

Those businesses are excluded from any tax relief by Mr Shorten. He said during a visit to Cairns, in the marginal seat of Leichhardt, that Labor’s newly announced $1bn tourism fund was superior for generating jobs and activity to the Coalition’s tax breaks.

“This will generate jobs in the start of all these projects and there will be jobs at the end of these projects on an ongoing basis and it won’t cost the $50 billion tax giveaway to the big end of town to secure all these jobs,” he said.

In last year’s budget reply speech, however, Mr Shorten argued that a government-proposed tax cut for small business was not enough. “Let’s go further,” the Opposition Leader said last May.

“Let’s give small businesses the sustainable boost to confidence that they deserve — confidence to create jobs.”

Those words led Carlton Horn, owner of the Raw Prawn restaurant in Cairns, to believe Labor was backing tax breaks for businesses turning over $10m or less. “I thought that it was also Bill Shorten’s policy, but now that I know it is not, I will be encouraging everyone to vote for the people who are backing small business,” Mr Horn told The Australian.

Mr Horn employs about 60 staff across two restaurants in Cairns, which each turn over between $2.9m and $3.7m annually. He sees himself getting nothing from Labor’s tax policy, as now explained by Mr Shorten.

“I would call on Labor to be bipartisan on at least the tax cuts to $10 million,” he said. “I would call for (Mr Shorten) to think a bit more about that.”