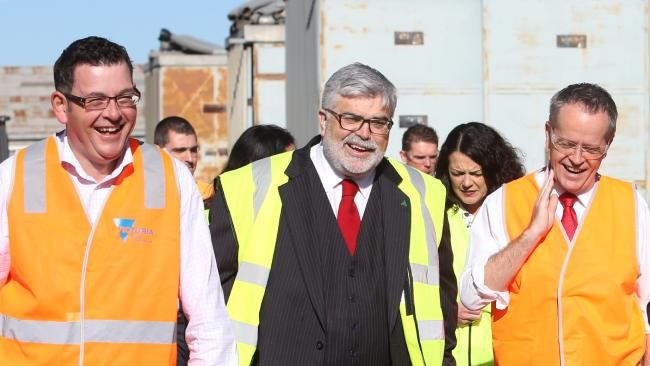 A Labor government will accept any Fair Work Commission decision to slash weekend penalty rates, but would use its influence as the government to pressure the independent umpire.

Senior Labor figures — including industry spokesman Kim Carr and employment spokesman Brendan O’Connor — today equivocated over whether a Labor government would accept the commission’s decision, due after the election.

Bill Shorten, who had previously promised to accept whatever decision emerged, today pledged to “intervene” in the case if he wins government on July 2.

“If we are successful on July 2, my government will further intervene in the case before the decision to strengthen, only as a government submission can, the case to defend our penalty rates,” the Opposition Leader told reporters in Geelong.

“I have no doubt that the case to defend penalty rates will win the day.”

Mr Shorten cautioned the Greens against their policy of legislating to protect penalty rates, saying they were “playing with fire” by taking the issue away from an independent umpire.

“I’m a believer in the independent umpire to help set the terms and conditions and take it away from the politicians. I would never want to see a system where we had to trust Malcolm Turnbull’s change of moods, his change of mind — something he’s notorious for depending on what the right wing of his party think.”

Mr Shorten, asked whether he could really guarantee to “keep weekend penalty rates”, as promised in ALP campaign advertising, said his party would “at every stage fight for penalty rates”.

Mr Shorten said there were about 50 Coalition candidates or MPs who had advocated curbing penalty rates.

“Those conservatives and those on the right who argue that the only way this country can grow is by cutting the wages of those who are less well off, well I just don’t buy that economic theory; that’s Turnbull economics.”

Refusing to directly answer whether he supported Mr Shorten’s view that FWC decisions were sacrosanct, Mr O’Connor said he had “great confidence in the ability of the Fair Work Commission”.