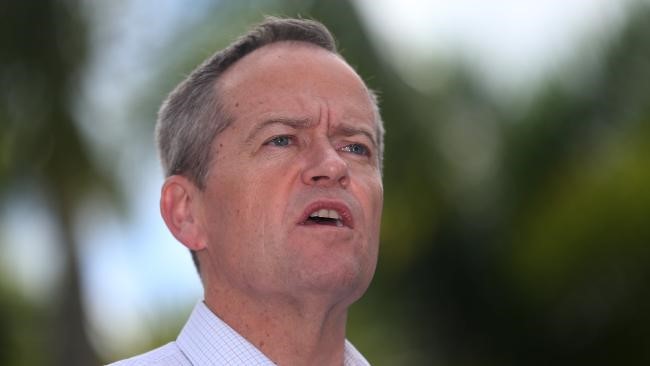 Bill Shorten has lashed out at Labor stalwart Keith DeLacy over his criticism of the opposition’s anti-business agenda, mocking the former state treasurer as a company director who wants a tax cut, as business leaders called for an end to class-war politics.

The Opposition Leader’s criticism of the former long-serving Queensland treasurer came despite at least a dozen Labor luminaries, including former premiers and party leaders, taking up boardroom posts.

Mr Shorten’s unrelenting attack on the Coalition’s proposed business tax cuts — which Mr DeLacy blasted as “the most anti-business policy I’ve ever seen federal Labor put to an election” — is driving a deep wedge between the Opposition and corporate Australia.

As the Opposition Leader yesterday declared he would not be “dictated to by business”, four of the nation’s most respected business leaders called for a higher standard of political debate, questioning Labor’s divisive election tactics.

Wesfarmers and Woodside chairman Michael Chaney lamented the “scaremongering and divisive approach that’s taken in modern political campaigns” that was pitting “battlers versus well-off, rich versus poor, haves versus have-nots, rather than working to achieve a greater pie for all”.

Tony Shepherd, the chair of the government’s 2014 Commission of Audit, said Mr Shorten’s agenda was fundamentally “anti-business” to a degree that would embarrass former prime ministers Bob Hawke and Paul Keating.

Mr Shepherd, the former president of the Business Council of Australia, also warned future Australians would suffer the effects of “intergenerational unfairness” if spiralling government spending was not reined in.

“I don’t think they’re continuing the Hawke-Keating legacy, and I lived through that legacy and worked with Hawke and Keating through that phase,” Mr Shepherd told Sky News. “I find this very disappointing, this attitude which is anti-business, fundamentally. Unless we get struck by a rainbow and growth takes off, the reality (of growing government spending) will still be there.”

The comments came after Mr Shorten hit back at comments from Mr DeLacy, the Goss government treasurer from 1989 to 1996. “Shock horror, a company director saying he would like to see a company tax cut for his company,” Mr Shorten said, insisting Labor “won’t be dictated to by business who want to see … a handout from the taxes and from the budget of Australia”.

More than a dozen former Labor MPs have stepped into roles as company directors, including party leaders such as Mr Keating, Bob Carr, Steve Bracks and John Brumby.

Former Commonwealth Bank chief executive and ex-Future Fund chairman David Murray also entered the fray. He said he was “puzzled” that Labor was calling for a banking royal commission when “no major issues were raised by the government or Opposition” on the findings of his landmark 2014 financial system inquiry.

Mr Hawke stepped in yesterday to try to neutralise the growing storm. “I know from my conversations with Bill that he is keenly aware of the need for Labor, in government, to co-operate with both business and the trade unions to optimise conditions for creating growth,” Mr Hawke told The Australian.

Corporate Australia’s relationship with Canberra sank to its lowest ebb during the Rudd-Gillard-Rudd era.

“Labor has the legacy of the poorly conceived mining tax and carbon taxes to overcome, but its recent policies give few in business much confidence that the lessons of those debacles have been learned,” Mr Bradley said. “For example, Labor’s recent opposition to the China Free Trade agreement was inexplicable and its expensive renewables targets will impose power high costs on businesses and consumers.”